In addition to the books below, check out my book series: 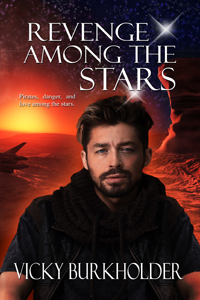 Aleksia Matthews is left for dead, after space pirates attack her ship and kill her brother. She swears to avenge his death, but knows she can’t do the job alone. After taking out an ad for a bounty hunter, she weeds out the bad from the good, and one man stands out. He could be the perfect partner—and that scares Ali more than the pirates do.

Special agent Jason Cole is tracking the pirates who killed his family, but he’s always one step behind. There have never been any survivors—until now. He needs Ali to identify the attackers, but she proves to be stubborn. She plans to go with him on the hunt, and he’s determined to keep her safe.

While Cole and Ali seek revenge, someone at headquarters would like to see them fail. Together they battle explosions, their emotions, and danger from one of their own.

This is a free anthology written by four of my friends and myself. It’s a mixture of paranormal, suspense, contemporary and more–just like we are. A mixture.

he premise: That if 5 authors start with the same sentence, they will all write vastly different stories. The results: made of awesome. From contemporary to futuristic, these novellas have a little bit of everything, but most especially—love-filled happy endings.

Rebound by Allison B. Hanson
After wallowing in agony for weeks after a bad break-up, Reese is set up on a blind date. Reluctantly, he goes and meets the girl of his dreams. The only problem? He was at the wrong place and met the wrong girl. Now, desperate to find her, he scours the campus as fate weaves an impossible journey.

Lost and Found by Misty Simon
When Mike Emory sees his ex’s post on social media that she’s looking for her lost dog, he’s out the door in a flash. Their break-up was not amicable, but he loved that dog and can’t imagine him on his own. Elsie Hews has been scouring the streets for hours when she runs into the last person she wants helping her—the guy who never seemed to think she was capable of doing anything herself. This is her dog, though, her baby, and she’ll accept Mike’s help to find him, then say goodbye again. Or that’s the plan, at least…

Frozen Dreams by Victoria Smith
When a dangerous weather anomaly strikes, Jane will do whatever it takes to travel to be with her family. Even if it means getting stuck with her husband, Adam. Instead of talking to him about how they will never have a family, she took the chicken route and left, despite being deeply in love with him. Now they must face the storm and their emotions.

Through the Void by Natalie J. Damschroder
There’s only one thing Vix can do when she finds out about the secret life that has led to her husband’s coma—make that life hers. When she goes on her first mission through the void, however, she finds not only a new self-purpose, but her lost husband, as well. She did the impossible once. Can she do it again, and bring him home?

A Real Boy by Vicky Burkholder
Jillian Night is on the hunt for inter-planetary kidnappers. Her bosses demand she have a partner, but Jillian has had enough of human ones. She prefers to work alone so Fleet assigns her one of the new androids. Zeus is a little too real for Jillian’s comfort and she finds herself attracted to him—until she meets the real man pulling the strings. Maybe having a real, live partner wouldn’t be so bad after all.

Download for Free Now (universal link) or at the following vendors:

All writers need to create settings for their books. Through a series of explanations and questions to be answered, this book will guide you to the best possible world you can build. Though aimed at science fiction and fantasy, it will also help with any genre, any time period.

Private investigator Dean White doesn’t believe in the supernatural, and he spends his time hunting down and exposing those who claim to have such powers. Maggie Daniels is next on his list. But Maggie turns out to be a very real witch … and she’s not the only one! When a not-so-friendly witch sets her wicked plan in motion, Dean will have to suspend his disbelief if he and Maggie are going to survive. Finders Keepers is the delightfully charming new romance that is short and sweet.

Sunny isn’t the shy little shifter she was when she left town. Now back for her high school reunion, her classmates are in for a surprise. There’s a new alpha in town and the claws are out to see who will be top dog! Who’s Your Alpha is a new contemporary short, sweet romance about letting go of the past and finding your future.